The pharmaceutical contract development and manufacturing industry is an important vehicle in public health - It reduces the time-to-market for new drugs, getting life-saving treatment to patients sooner. I couldn’t find a primer on the market so I thought I’d share what I’ve learned about it.

You can split knowledge about a drug into two distinct categories: what the drug does, and how to make it.

The first category is the province of research scientists - knowledge about what the drug does to the human body, how to deliver the drug to the body, and how the drug fights disease.

The sexy side of biotech is the former. But we can’t get drugs to people who need them without the latter.

Contract Development Manufacturing Organisations (CDMOs) are the engine room of the pharmaceutical industry. CDMOs focus on the technical operations of producing drugs - how to make the physical things which get put into human bodies to make them better. They take this work off the hands of pure biotech companies who can focus on discovering new drugs instead of learning how to mass produce them.

This is a good deal for both parties. Drug research and development is a very different skill to drug formulation and production. It is prohibitively expensive to develop new drugs, so biotech companies understandably don’t also want to shell out for production facilities as well.

The global pharma market is in a period of sustained, long-term growth, fuelled by three big trends: Global population growth, an ageing population in developed countries, and better healthcare provision in developing countries.

A growing world population means more people, and more people means a higher pool of people who could potentially fall ill. Population density is also increasing as more and more people live in big cities. Increasing population density leads to increasing spread of disease, which means the number of people worldwide who need to be treated with drugs is going up. This trend mostly puts demand on drugs treating commonly occuring diseases, like malaria, hepatitis, and tuberculosis.

Grandma is more likely to be ill than grandson - as we get older we get sicker. The more elderly people in a given population, the higher the proportion of illness and disability, and the higher demand for drugs. Since every developed country has birth rates below replacement, this trend can only continue. An ageing population increases demand for drugs treating chronic and degenerative diseases, like cancer, heart disease, diabetes, and dementia.

Emerging economies are growing, and the people in them want better healthcare. A growing middle class in countries like Brazil and China are increasing demand for pharmaceuticals across the board.

With revenues of c. $1.25tn in 2019, pharmaceuticals is the prototypical “trillion-dollar market”, and is expected to grow at around 5% a year to $1.5tn in 2023. Within this, CDMOs are projected to grow even faster.

The CDMO market is worth c. $110bn, and is projected to grow around 7% per year for the next five years. Pharma companies contract manufacturing out to CDMOs along their entire value chain - from pre-clinical trial drug development all the way up to large-scale production, formulation, and packaging. 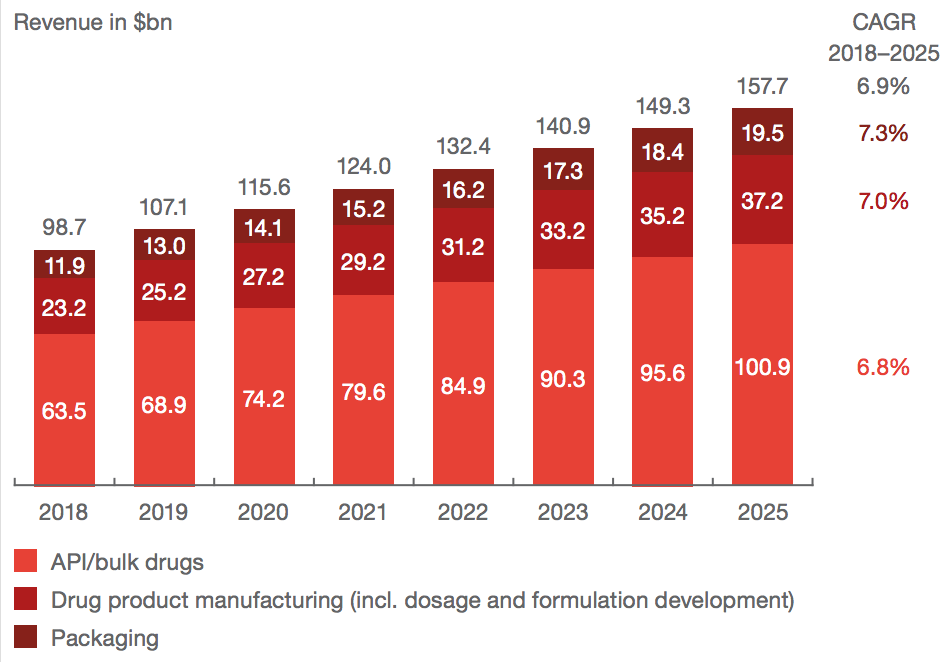 The CDMO market is highly fragmented. There are hundreds of firms, and the five biggest players only have 15% market share. The market is so fragmented because it is highly differentiated - there are so many unique production and formulation technologies so several different kinds of firms can exist.

Others, like Lonza, are vertically integrated. These companies offer a “full-stack” service, taking over production from the prototyping, pre-clinical stage all the way up to commercial mass production.

The differentiation of technologies also allows for a profusion of niche players, who often have expertise in only one technology. There are over 100 small companies like this, with yearly sales below $25m. Many are family-owned.

The CDMO market looks great long-term, so many investors want to put their capital into it. Several big mergers & acquisitions have occured recently at high EBITDA multiples. Lonza bought its supplier Capsugel at a 15.1x multiple, while the private equity firm Carlyle bought AMRI at a 17x multiple.

The drug development lifecycle is unbelievably complicated, with many development, production and regulatory hurdles. Pharma companies often have to partner with many organisations to reach full production of their drugs (Sanofi have over 300 unique partners), and want to work with fewer.

Pharma companies prefer bigger CDMOs over smaller ones, because they can provide more services, which means fewer contracts, and they have better unit economics due to their scale, which means lower unit costs.

Customers of CDMOs care about a few key factors:

CDMOs make money when their production sites are contracted out to their customers. For business to remain healthy, they need to keep an eye on a few things:

The last factor in particular is interesting, because in some ways the CDMO industry is like modern venture capital.

A successful CDMO contracts itself out to many customers, producing each of their drugs through clinical trials. Like a VC fund, it shares the potential upside with each of its customers - if the drug is successful in trials the CDMO is in prime position to be the lead manufacturer, scaling up production to millions of units per year. Because the CDMO is diversified across a broad range of drugs, it is insulated from the risk of failure of any one drug.

Why I think CDMOs are cool

CDMOs are an example of what I call a “real” industry - if you subtract away any shiny marketing, does the industry actually solve a real problem? For CDMOs, the answer is an unequivocal yes - they successfully reduce the operational complexity of biotech companies, allowing them to focus on developing new drugs instead of producing old ones. And they successfully reduce drugs’ time-to-market, enabling life saving treatment to reach patients faster.

CDMOs will never be as famous as successful biotech companies. Most people would rather discover the cure to a disease, rather than make it 1% easier for cures to all diseases to be found. But the latter is probably more impactful. CDMOs operate behind the scenes, streamlining the innovation pipeline, making it easier for biotech companies to cover themselves in glory.

You can measure the effectiveness of the CDMO market not just by its revenue, but by the number of lives it saves, and the number of life years it adds. It’s a multi-billion dollar industry improving multi-millions of human lives.

Minimum Viable Novelty Coronavirus upended my life. I was bed-ridden, locked-down, and furloughed from a job I had just started. Feverish, confined within four thin walls,