The Start of Emergence

A summary of More is Different by the great P. W. Anderson. All errors and omissions are mine entirely. All good stuff is down to Mr. Anderson.

One of the breakthroughs that kickstarted modern science wasn’t a scientific discovery, but a philosophical one.

Reductionism, the idea that you can learn about higher-level systems by breaking them down into their atomic constituents and studying those instead, fuelled the accelerating engine of science in the 19th and 20th centuries. But reductionism does not imply constructionism. Although chemistry is based upon the laws of physics, you cannot learn all of chemistry by learning physics.

Different levels exist. A water droplet is a circular agglomeration of molecules, pinching and rolling past one another, each made up of two Hydrogen atoms, anchored to an Oxygen. The atoms oscillate forwards and backwards, like springs attached to one another at a funny angle. These atoms have a highly dense nucleus surrounded by disparate electrons, whizzing around at astronomical speeds. Even the nuclear building blocks can be broken down further. The behaviour of molecules is different from atoms, which is different from water droplets.

Even though water droplets are made of atoms, the rules that govern atoms do not scale to molecules, or collections of molecules. new behaviour emerges from the interactions between lower-level constituents. More is different. 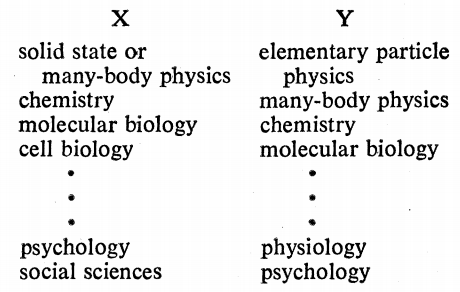 There are some rules that systems must obey at all levels. Just as the speed of light is a fundamental limit on how fast anything can travel, the laws of thermodynamics are fundamental limits on how energy can be transformed. In systems where time and space have predictable properties (e.g. time is continuous) we can show that energy and momentum must be conserved.

At a higher-level, systems tend to have less symmetry that at a lower level. For example, a hydrogen atom is highly symmetric. In quantum mechanics, we usually treat it with spherical symmetry, which reduces a complicated system of 3 equations down to 1 simpler equation. But an H2 molecule, has only two axes of symmetry; the spherical atoms which it consists of have infinitely many. Natural symmetries lead to conserved mathematical quantities, and simpler calculations. One of the reasons higher level systems are harder to model is because they lack the symmetry of their constituents.

In certain surprising circumstances, higher-level systems exhibit “broken symmetry”, and show behaviour where the lower level rules are violated even at the local scale. For example, as solid iron is cooled, its atoms jiggle around exchanging thermal energy, each one a tiny bar magnet of its own. To begin with, each atomic bar magnet points in different directions, but all of a sudden, when the metal is cooled to a critical temperature, the magnets all line up in the same direction. But why did they line up in that direction? They could have ended up the other way around. At the critical point, the tiniest, microscopic fluctuations influence the macroscopic behaviour.

Each level of a complex system demands a different conceptual framework. Much is gained from this point of view. Each level we can navigate conceptually is an additional lens with which we can examine our system. The more levels we know, the richer structures we can see.

Scientific insights are made by viewing systems from different perspectives. Consider biophysics, computational neuroscience, and quantum chemistry. The biggest discoveries are made at the boundary between one level and the next.

Strategy - Think Different An adequate summary of Michael Porter’s ‘What is Strategy?’ so you don’t have to pay $8.95. All errors and omissions are mine entirely. All good

Revolution Within The Mind A summary of “Destruction and Creation” by John Boyd. All errors and omissions are mine entirely. Everything good is down to “The Mad Major”. Making