A summary of this great game theory paper which provides a continuous framework for analysing all classes of games. All errors and omissions are mine entirely. All good stuff is down to the authors.

Imagine you and a stranger are tasked with lifting a heavy weight. Neither of you know exactly how heavy it is, and whether it will be possible for you to lift it. If the weight is lifted successfully, you each get a reward. If you helped lift it, you pay a cost, depending on your exertion. If the lift is unsuccessful, you both pay a fine. In this situation, you have two choices. You can cooperate, and help lift the weight, or defect, and not risk the effort. What would you do?

Game theory is the mathematical study of why rational agents cooperate in different circumstances. Invented in 1947 by Von Neumann, it has proved useful in modelling human and animal behaviour. All 2-person games can be classified as special cases of 5 general games:

For example, in the prisoner’s dilemma, two prisoners, Alice and Bob, are locked up in separate cells, unable to communicate. Each one can either rat out the other, or stay silent. If Alice rats out Bob while Bob stays silent, Alice goes free but Bob gets a long sentence. The same goes the other way around. If they both rat each other out, they both get a long sentence, while if they both stay silent, they both get a short sentence. Because she doesn’t know what Bob will do, Alice’s optimal strategy is to always defect. But the best strategy for both Alice & Bob is for both to stay silent. This mismatch between individual vs. group strategy is the Prisoner’s dilemma.

Different games have different dilemmas, and as a result are studied separately. But for the first time, a game has been proposed which covers all 5 categories of games, allowing all dilemmas to be studied within a single framework. This is the weightlifting game.

The weightlifting game has a few parameters. The reward, r, the cost of lifting the weight, c, and the fine, f. Additionally it also has probabilities that the lift is successful, since we don’t know what they are in advance. Call them p0, p1, p2, depending on the number of people cooperating. The probabilities of failure are hence 1-p0, 1-p1 and 1-p2.

Games are studied using a payoff matrix. This is a collection of numbers which shows how much either player stands to gain or lose from each scenario. For example, the payoff matrix for the prisoner’s dilemma is below:

You can also show a single-player payoff matrix. For the prisoner’s dilemma, it looks like this: 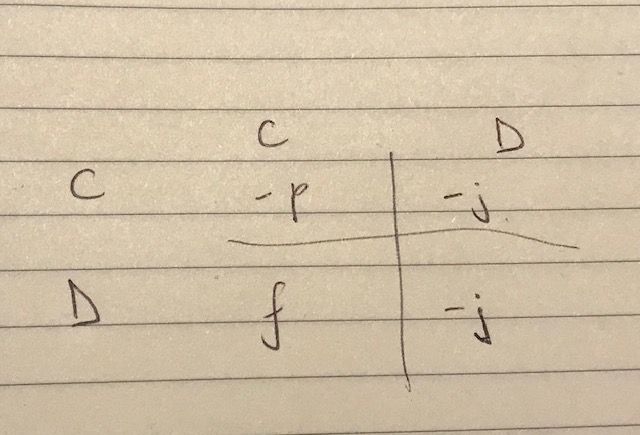 With this information, we can write down a payoff matrix for the weightlifting game.

Using b = r + f, the potential benefit of success against failure, we can rewrite this in a simpler form.

This is awesome, because it means we can study every type of game in a single coherent framework for the first time. For example, below is a phase-diagram of the weightlifting game, with two varying parameters, Dp1= p1-p0 and Dp2=p2-p0. The other values are set to constants. Each of the 5 game classes are stable in some portion of the phase space. 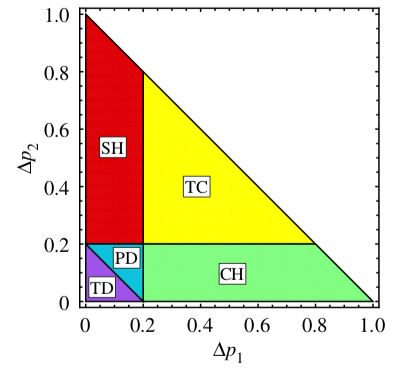 Why do we care?

There are complex social situations, which can initially be modelled as one sort of game, but due to changes in the probability of success, evolve into another type of game over time. This scenario can be continuously and coherently modelled by the weightlifting game.

One example is the development of scientific fields. In the early phase of a scientific field new discoveries are just starting to be made. Many people are cooperative to enhance the probability of success. As the field develops and looks more promising to outsiders, the number of agents in the field increases, but the cooperation decreases as more self-interested people want to get in on the action. Finally, as discoveries dry up, growth slows, and zero-sum dynamics kick in. The field goes from a stag-hunt/trivial cooperate game, to a chicken game, to a prisoner’s dilemma/trivial defect game. It remains in relative stagnation, until a new big discovery kickstarts the dynamics back into the stag-hunt game again.

The end of theory? This is a transcript of a 3-minute thesis I gave on this paper about Big Data in biology in 2018. Modern Science is moving faster than ever. We are

Two Orders From Chaos A summary of this paper which provides a coherent framework for analysing hysteresis and phase coexistence in bistable systems. All errors and